There comes a time in life when it hits you with astonishing clarity that you are just “too old for this sh*t”. Here is a handy list of red-flag experiences, sensations and realizations that will let you know, in no uncertain terms, that you are definitely too old to be at this kegger.

One. Upon entering a party, you become painfully aware of every safety violation in the space. Your eye is immediately drawn to shoddy flooring, loose railing, gaping holes and faulty electrical wiring. Instead of enjoying the cool artwork or hip music, you find yourself entertaining thoughts like “Who was the sick psychopath that put this together?” and “I don’t want to die like this”.

At basement concerts, you cannot help but imagine “something” going terribly “wrong” and the inevitable stampede of freaked out agile drunks that will clusterfudge towards the solitary tiny staircase leading up and out. Anxiously eyeing multitudes of candles precariously balanced on stacks of books, you calculate the best and worst case scenario outcomes and realize they are not far apart. Your eyes frantically search the area for the “EXIT” sign, despite knowing all too well the ridiculousness of such an expectation. As you squint around looking for potential escapes, it hits you that your eyesight has gotten really bad and it’s time to make an appointment with an ophthalmologist.

Two. You used to play drinking games to lose, because drinking was the fun part. Now, you play drinking games to win, because drinking is the deadly part. For years, you went on demolishing your health, throwing down like there was no tomorrow. Now that “tomorrow” is here, you are either a frail invalid with zero ability to hold down liquor, or an intolerable alcoholic with a violent streak. Either way, you NEED to win at beer pong, if you don’t want that disgusting stuff hitting your leaky gut and agitating the IBS.

And that’s another thing – with age, your liver has developed a more refined palate and refuses to process Popov vodka anymore. As this rules out approximately 97% of all liquor served at college parties, you are out of luck. And this means no jello shots. And without jello shots, what’s the point?

Three. Your definition of and tolerance for noise have changed — and not in a life-improving way. You see no point in trying to interact in a loud room. You grow increasingly frustrated from being unable to hear a single word the other person is saying. No amount of yelling will cut through the zoological bleatings emitted by what people are referring to as a “band”, “playing”, as people are referring to it, two feet away.

And so, you are forced to nod along with the “conversation” as if you understand what is happening, which you resent having to do. Watching the other person make faces and laugh as if they understand what you are saying reminds you of the pointlessness of life and your own mortality. The next thing you know, existential dread sets in: “Who am I?” “What am I doing here??” “Are they really making a gravity bong out of that fish tank with a live octopus in it???”

You wearily make a note to self that you simply no longer have leisure time, intellectual motivation or life energy to pretend to talk and listen, while having your senses assaulted by the musical stylings of what can only be tone-deaf quadrupedal marsupials honking their noses and flapping their pouches. The whole thing seems like a blood-pressure-raising exercise in futility, so you return to the nervous scanning of the perimeter for signs of fire hazards. There are even more than the last time you checked.

Four. You routinely stop yourself from saying something “inappropriate” because you’re worried about setting a bad example. You and your generation went a bit trigger-happy with all the sex and the drugs and the rock-and-roll – and now that you have a doe-eyed audience hungrily attending to your wisdoms, you realize that what you have to offer may not be so kosher.

Even as you proceed with caution, you can’t shake imagining the parents’ disapproving looks and scornful questioning: “Why are you telling our children about the cocaine trade of Colombia? Is this a responsible thing to do?” *blush* “No, our child does not need to know about the ping-pong shows of Bangkok’s whorehouses, what’s wrong with you?” “But, I brought it up in the context of talking about the Marxian / Engelsian “false consciousness” of the oppressed masses.” “Well, our child definitely does not need to know about that!!”

So you hold back and don’t tell them about that time you had to pay off the Chinese border patrol from busting you and your friends smuggling uranium to the Russians. Because you are a responsible adult and should not encourage espionage in young people.

Five. Women in tiny outfits don’t turn you on or feel like competition – they make you cringe. Upon beholding the flesh parade of coeds in teeny tank tops and tiny mini skirts teetering around on stiletto heels between bars and parties in subzero winter temperatures, you don’t even think to sexually objectify them — you just want to help them survive the night.

Merely looking at them makes you feel cold – and concerned for their health. “Here,” you want to say wrapping each girl in a Snuggie and handing her a hot cup of tea, “you’ll catch your death out here in this weather! And while we’re at it, here’s some comfortable flats for you to walk in – do you have any idea what those heels are doing to your knees and ankles, guuurl?”

Six. Speaking of interrupted sexual objectification… Cruel fate of aging mutes the “sexy goggles” and adds on a layer of “parent / authority figure goggles” prompting you to see college kids as actual KIDS. Before, you looked at young, fine, able-bodied college students partying and were like, “Yeah!! That’s hot!! Bring it ON!” Now you behold those same people socializing and see wee babies sipping on their little juice boxes, rolling and poking around in a sand pit.

You are struck by the realization that, while the problems in your life can be expressed in numbers with dollar signs and unpronounceable pharmacological terms, these little creatures’ immediate worries only run the scale of A+ to F-, and they even left out the E. You don’t want to screw them, you want to grade them.

Seven. You are no longer impressed with or seduced by what passes for “sweet talk” at college parties. Let’s face it, when you were young, the shallowest compliments flattered you and the dumbest revelations blew your mind. But now that you have been alive for a while, fresh, unique or original material is very, very hard to come by anymore.

Simply put, beyond a certain age, you start walking through life knowing that everyone in the room, including yourself, is full of shit. You have heard — and used – all possible lines from the book of universal pick-ups and every epic tale of personal heroism / awesomeness. As the result, now, everyone is transparent and predictable. Oh, you’ve been to Burning Man? And what, pray tell, happened there? You had a spiritual awakening?? No way – really?? And it was –what? – life changing?? NOOOOOOO!!! You don’t say!!

What’s worse, it begins to irritate you that these poor bastards are listening to your lame lines and tired stories with wide-eyed amazement. Are they seriously buying this old-ass folklore you’re spinning at them? You’ve heard yourself vocally torture these narratives and the characters in them too many times – and now, your inner critic won’t quit with the eye-rolls, spoiling all the fun.

Eight. The final nail in the coffin of belonging at a college party is the sharp spiraling of the cultural divide. Out of nowhere, you find yourself in a one-sided linguistic incompatibility loop with everyone around you: they can understand you but you cannot understand them.

There’s nothing like realizing that you are speaking different languages with these people and the difference is, alas, generational. *GASP* References are being made to things you cannot begin to identify, while words you have never heard before – as well as words you thought you knew the meaning of until just now – dominate the conversation, making you work way too hard to follow along.

It is a sensation similar to when you are learning a foreign language and get into a conversation with a native: all your energy goes towards piecing together the few familiar-sounding words you caught – with the general context of the conversation – with hand gestures and facial expressions of the speaker – just to make some kind of sense of it all. Except that not understanding a foreign language makes you feel like an infant, whereas not understanding college slang makes you feel HELLA old. 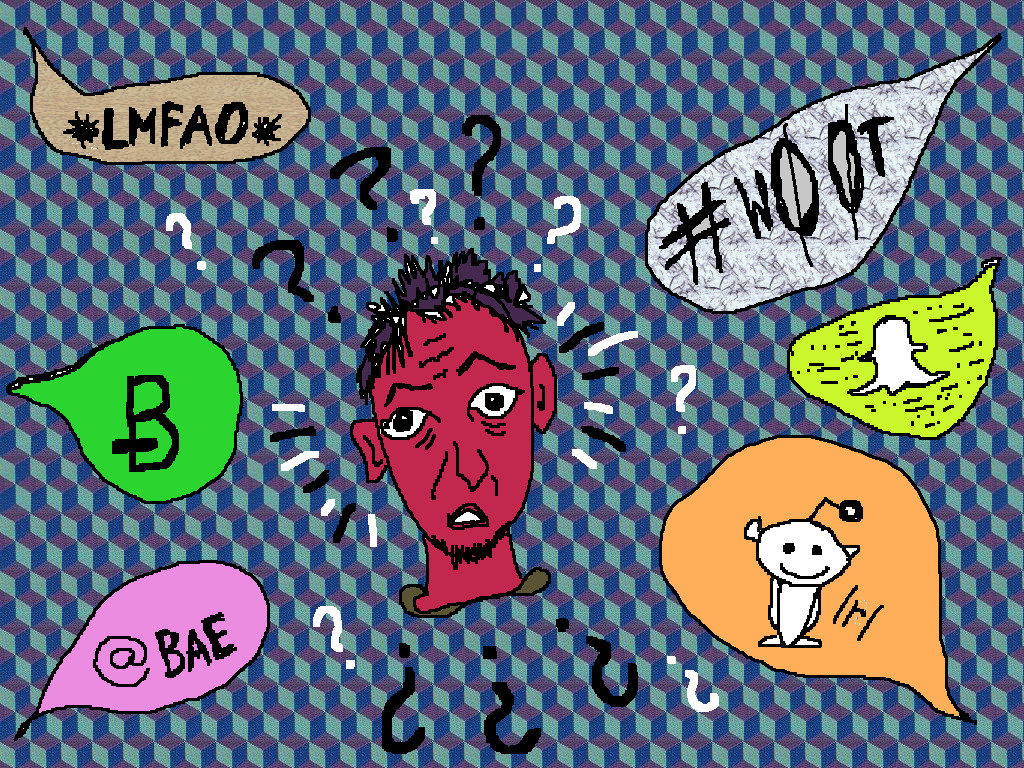 You heard WHAT on WHAT?