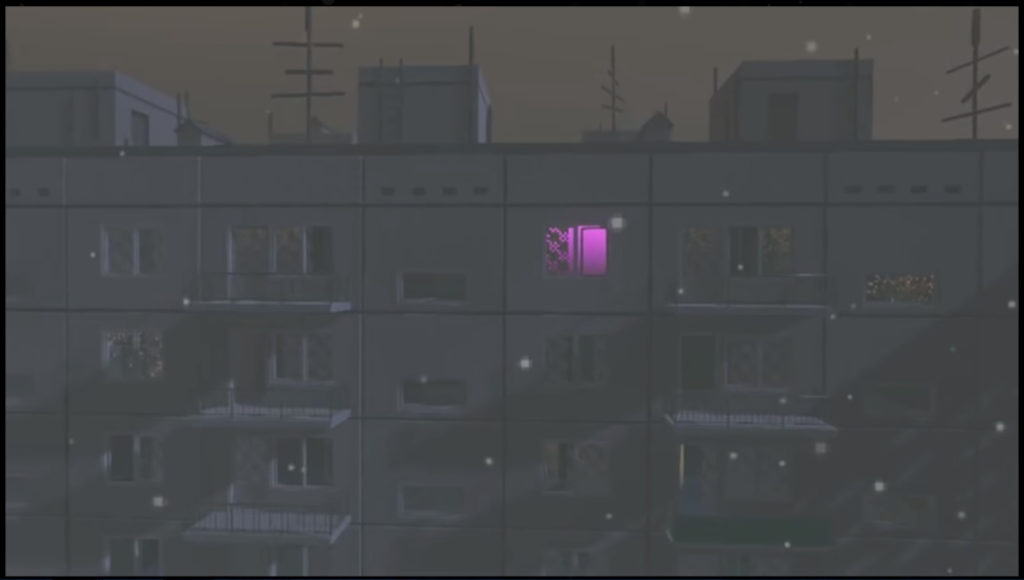 So, I came across this new game out of Russia called “ШХД: ЗИМА”. In the English-speaking world, it’s translated simply as “It’s Winter”. It’s an immersive game with no mission, though doing nothing could be a mission onto oneself, I suppose. Modern video games, especially of the “sandbox” format, seem to come in all flavors, including, evidently, ones where the objective of the game is to just be / exist in the virtual space in real time with zero motivation to go on (uh-huh, just like in real life…)

It’s the dead of winter in Russia somewhere. It’s dark outside, which for Russian winter could be day or night: when you’re that far up north, this time of the year is just steeped in darkness. You live in one of those massive Russian residential blocks made up of identical apartment buildings, situated in the middle of a forest. You get to hang out in your own apartment or take a stroll around “the neighborhood”. 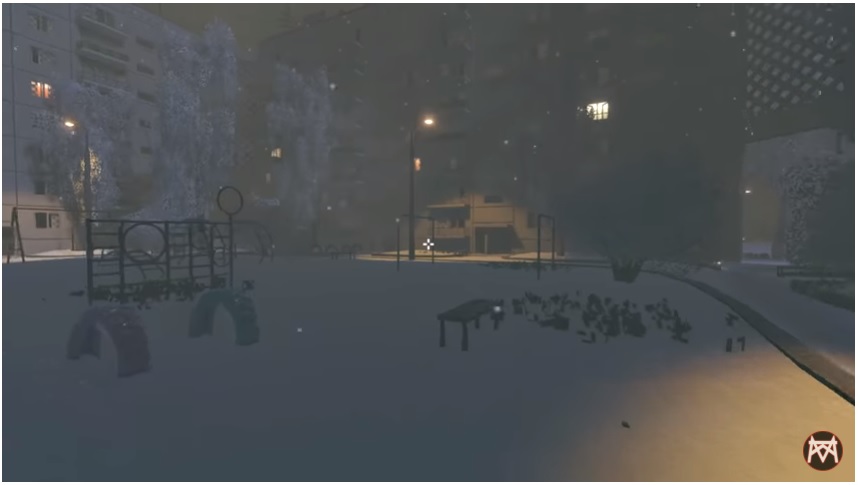 There is no goal or mission to your wanderings around this sedated virtual world: there is no puzzle to solve, no challenge to beat, no achievement to unlock. You just walk around. Or stand around. Sometimes you carry objects from one place to another. Sometimes you come across possible signs of life — like a lit sparkler next to an empty glass left on the park bench — but there is no one ever there.

The creator(s) did a great job colliding reality with magic in the minimalistic rendering of this winter wonderland (the pixelated snow is a nice touch.) They simultaneously captured the peaceful beauty and charm of the Russian winter night and the howling isolation and despair of being “stuck” in the god-forsaken perma-frozen, dead-ended vacuum that Russian rural / suburban living can be. The atmosphere is at once cozy and disturbing, enchanting and creepy, futuristic and nostalgic. No doubt, the dreamy electronic soundtrack facilitates the dissociative-ness  of the experience. 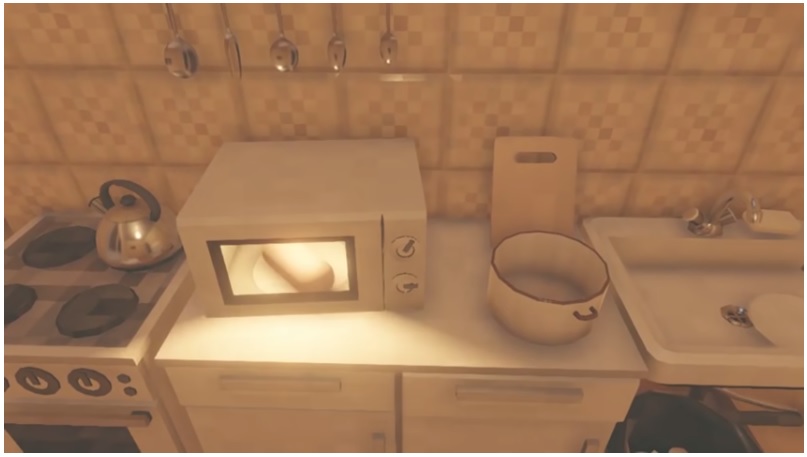 Despite the achingly familiar landscape, this world is a fantasy. For one, everything is kinda on the clean side LOL Anyone familiar with Russian residential realities would expect dirtier exteriors and shabbier interiors (and less poetic graffiti on the walls…) But, primarily, it feels like an alternative reality because, you know, there aren’t any people. None! No animals either, as far as I could tell. There is no one to interact with. This world feels vaguely post-apocalyptic, even though, besides the whole “no people” thing, everything looks more or less normal.

Outside, the scene is empty and static. Some apartment windows have light, but banging on doors yields no answers. The store signs are on but the entrances are locked shut. In the yard, you run into a tractor or two driving around. Its windows are lit, but you never see a person inside: the tractor does its own thing independently of you and provides no definitive proof of life. 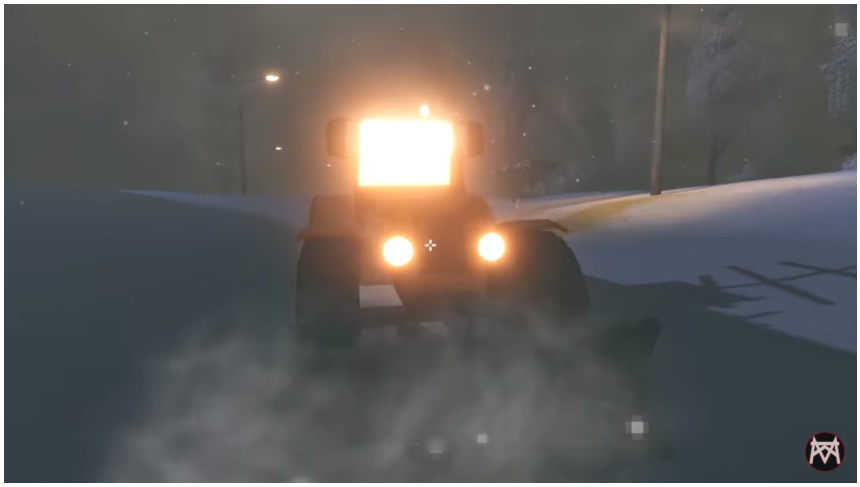 Back at the apartment, aside from cooking various foodstuffs found in the fridge, you can move around some objects and mess with the TV and radio sets. The TV comes on, showing nothing but static. The radio, at first, plays some static, but if you wait a few seconds, a distorted humanoid female voice comes on and begins to recite poetry. The voice appears several times throughout the game, as you come into contact with various spaces and objects: in those moments, the game freezes your controls and you have to wait out the poem scene to continue. The not-quite-human/quasi-robotic sound of the voice and the strange, fragmented yet entrancing poetry intensify the feeling of being the last survivor of something, you’re not sure what. All you know is that you are in a world forgotten. (I was reminded of Ray Bradbury’s “There Will Come Soft Rains”, a short story about a future in which all humans are gone due to nuclear wipe-out, outlived by countless robotic home appliances that continue to do their jobs serving humans, even when there are no humans left to serve…) 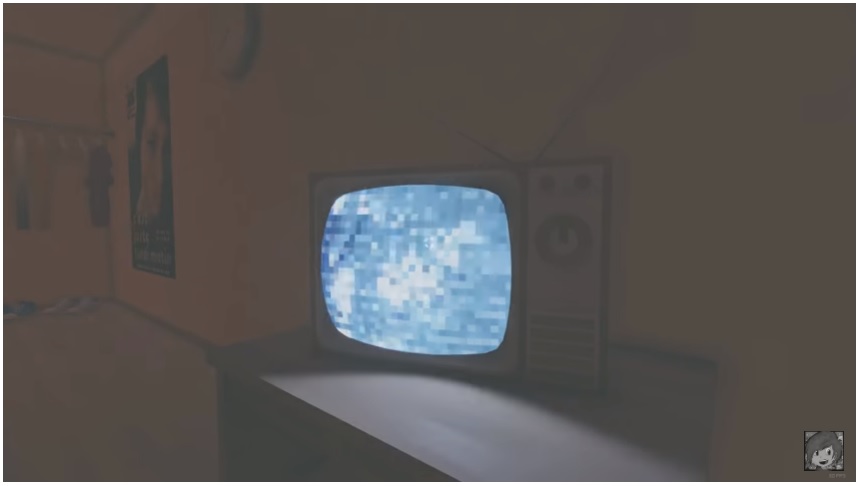 The spirit of exploration winds down pretty quickly in this game. Initially, you run around trying to figure out if there are special signs to reveal new information and special objects to grant you access to something / somewhere new. Soon, however, you discover that nothing leads to anything in particular. That the more you walk around outside, the more you end up on your own block, as the surrounding buildings are essentially copypasted clones of your layout. If you wander off too far into the forest, you will run into a haze that will paralyze you with more poetry, and the next thing you know, you’re back on your block again. It’s reminiscent of the classic horror flick “Nightmare on Elm Street” that way — you think you left the location, but you just arrived back to where you started. I can’t help but see it as a bit of a commentary on the dead-ended prospects of so many Russians, young and old, occupying the rural vastness of their homeland. The winter is very long and dark and the opportunities for cultural life, professional development and economic growth are limited, to say the least. 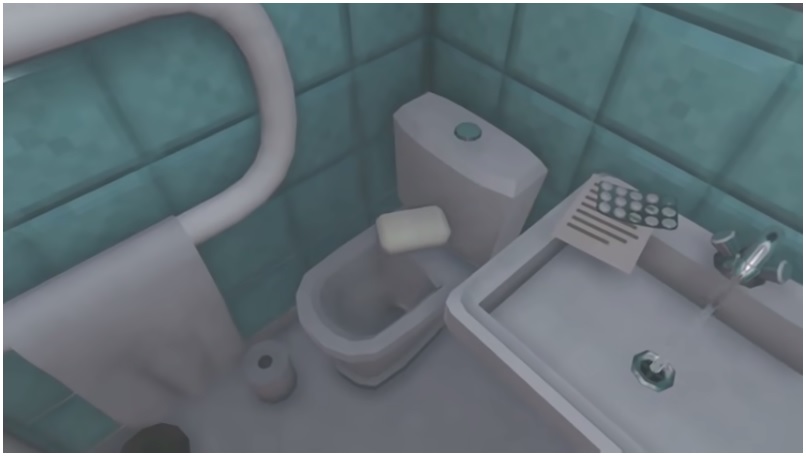 It should be noted that “ШХД: ЗИМА” is actually a multimedia avant guarde “digital opera” art project by Moscow poet and musician Ilia Mazo, involving a number of collaborators and consisting of a number of presentations, including a film, a book of poetry and a music album — with the game only being one piece of the project (designed by Aleksandr Ignatov aka SAD3D). For this reason, “It’s Winter” is more of an arthouse experience than a “game” in the sense that it lacks specified objective and evokes contemplation rather than competition.

As it goes with immersive art, the participant’s mood / state of mind may very well dictate the game experience. In my case, despite my usual distaste for freezing climates, I found myself yearning for the privacy of this place, with its own minimalist coziness. Lately, I’ve been on the road and “between homes” a lot — and the well-heated, relatively spacious apartment at the edge of the post-human world comes across as quite an appealing sanctuary to my loner heart. But only for a brief visit, I don’t think I could dwell there for too long voluntarily. The seductive melancholy could turn into crushing despair in no time, considering that the sun never rises in this world. 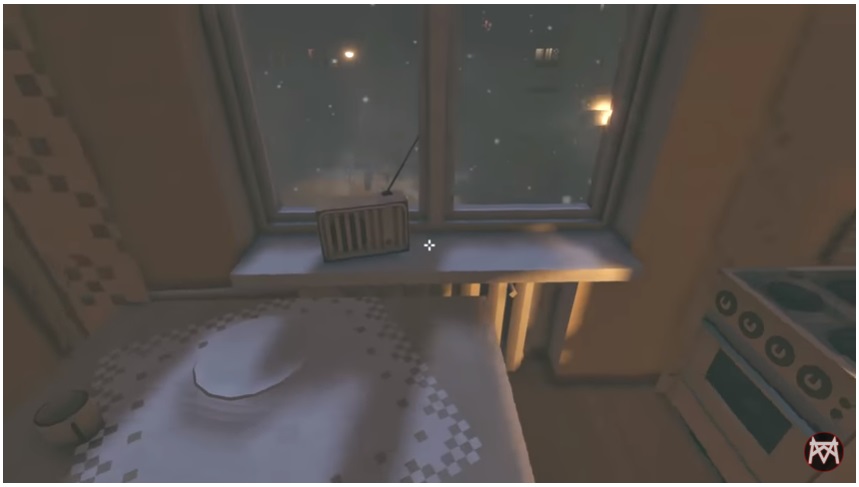 The graphics are stripped down but that’s part of the metaphor, I think. The game still has some markers of the classical sandbox puzzle-solving games, such as Myst or The 7th Guest or Russia’s GAG (can you tell that the last time I played these things were the 90’s? LOL) — in the sense that you can find seemingly useful objects and move them around in the hopes that they lead you to something. Except that there is no purpose, no goal-orientation to any of what you do — or don’t do — in this game. The futility of seemingly meaningful things, signs, acts and events is a classical motif in modern Russian storytelling (I’m thinking Victor Pelevin’s Omon Ra, for example.)

Go on, turn on the TV, microwave an apple, flush the soap down the toilet, walk around the block in circles — that’s all there is to the game. Considering that there is also no way to die, it is not completely evident that you exist in the first place. After all, you have no mirror reflection, nor do you leave behind any prints in the snow.

What is this isolated ethereal state of un-being? Hell? Heaven? Purgatory? Dream? …Russia?… Could this seemingly vacuous world be teaming with ghosts who are just like the player — searching for signs of life in the snowy darkness, but leaving no footprints to find our way back to each other?