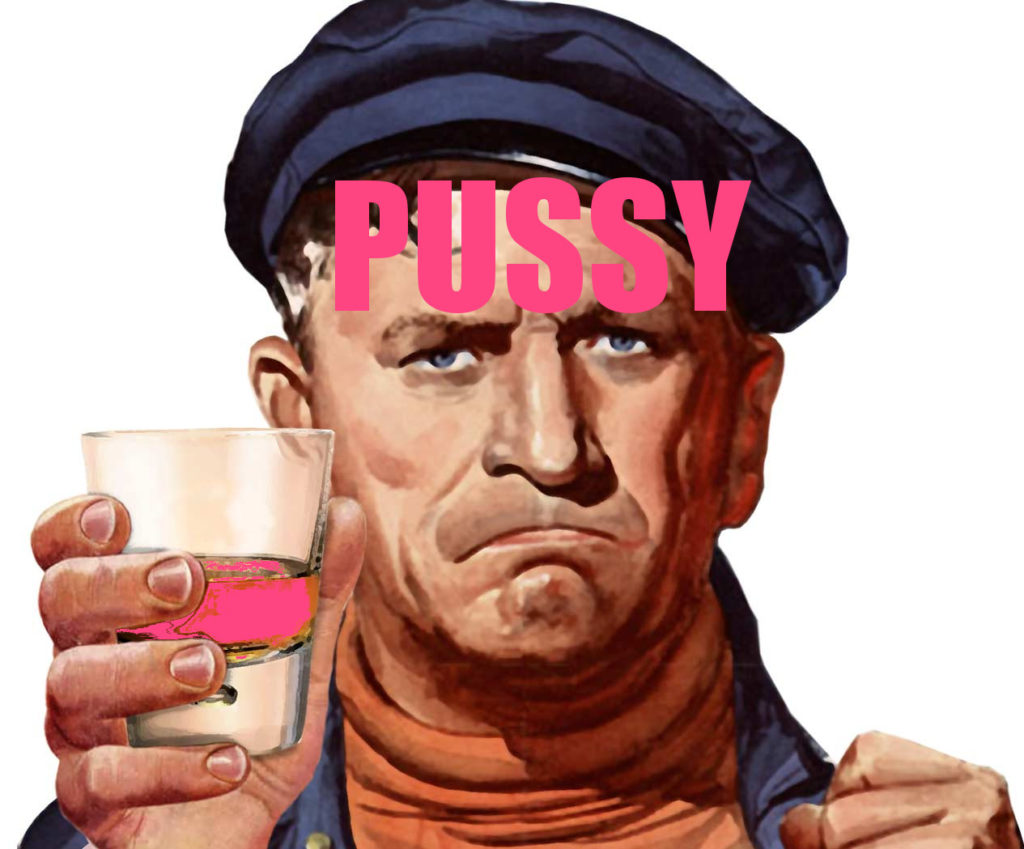 Consider this scene from an NYC bar, witnessed just a few days ago:

W: Emasculation is a myth.

M: Then get it yourself.

W: Alrighty then, I will.

M: Can you order my drink, while you’re at it?

Honestly, I thought that people have caught on to the ridiculousness of claiming emasculation. Don’t they get that the concept itself is wrought with internal contradiction? If you’re such a strong, independent, in-control dude, no one has the power to strip you of those things by definition. If holding a non-alcoholic drink in your hand for 30 seconds or coming in contact with something pink renders you completely demoralized, I hate to break it to you, but you are a weak, weak individual.

I cannot fathom being asked a mundane favor (especially after I explicitly offered to be of service) — and then, being like, “Nah, what you want / need is too lame and doing this for you will make me look too uncool to complete strangers surrounding us. So, uh, no.”

What’s happening here is not a degradation of a man’s dignity. A “man’s dignity”, after all, is just human dignity, applicable to everyone, not just men.

What’s happening is taken-for-granted privilege (is there any other kind?). Men have been socialized to feel entitled to say yes or no to others at whim. Having not been taught to doubt himself or invest into a bit of introspection (e.g.: why do I feel threatened by the color pink?), this pseudo-masculine type is not spiritually equipped to confront the roots of his uneasiness. All he knows is that he is uncomfortable and that it is someone else’s fault. Things he does not like or understand are simply “unbecoming” of him.

To bring this back to the opening example: refusing a woman a drink because it’s too “foofy” and then, in the same breath, asking her to get him one. If “hypocrite” is a type of masculinity, then you’ve got it up the wazoo, buddy. Just drop the pretense that women are anything more than a social accessory to you. Here’s the simple formula favored by such “gentlemen”, which, sadly applies to a much wider range of real-life scenarios than just drink-fetching and purse-holding:

What you are, dear cis men who use the “emasculation” excuse, are insecure and lazy. You rely on your delusion of grandeur for getting out of cleaning or serving others. You hide behind it to justify being a half-assed parent. You reach for it to cover up your ignorance of the female anatomy and unwillingness to learn to be a giving lover. You punish women for your own feelings of meekness and smallness next to other pseudo-manly-men, fooled by their empty, shallow fronting. The notion that desired masculinity is predicated on “not being like a woman” is a crock of shit you are still joyfully feeding from, while the rest of us have to put up with the stench.